St. Emilion was a pleasant place to visit for a couple of days. Wandering the cobbled streets, sketching the view from the high parts of town, tasting wine at one of the more reasonably priced wineries made for a relaxing respite before the next stage of our road trip. We ate and drank well, but were eager to travel on to the Château de Crécy in Romagne, in the Entre-deux-Mers region south of Bordeaux.

Our GPS unit, which had been so cranky on the drive to St. Emilion, got over it and proved to be exactly the tool needed to find our way deep in the French countryside. After the petite village of Romagne the roads grew progressively more obscure. Reinvigorated, the GPS led us straight to the château…well, with one u-turn since we initially sped past the modest drive to the property.

Approaching the entrance, we tried to guess the age of the long, rambling building. Pots of geraniums were clustered along the stonewalled footprint. Shutters and doors were painted in that shade of blue reminiscent of the Mediterranean Sea. Wine barrels striped in white and bright pink delineated the parking area.

As we walked towards what appeared to be the front door of the chambres d’hôtes, a tall, blond woman stepped out to greet us. It was Martine, the owner of the bed and breakfast and the person with whom I had corresponded in the weeks before our arrival. Speaking in French, I introduced Bill and myself. She nodded with a perky smile and responded in that rapid French that leaves me bewildered. “Oh, Madame” I said, “Je parle un peu de français. Répétez moi lentement, s’il vous plait.” The look in her bright eyes expressed understanding and some disappointment as I explained that I spoke little French and needed her to speak more slowly.

Martine nodded and repeated her words, first in French, then in hesitant, careful English. She explained that when she decided to become an innkeeper she started studying English. Almost with one voice we said, “C’est très difficile!” Yes, it is very difficult for adults to learn a foreign language.

The door opened right into the front room or lounge as they referred to it. We felt at ease the moment we walked into the space. Pale gold limestone walls supported the low-beamed ceiling. Bookcases stuffed with well-worn books and intriguing small pieces of art flanked a huge limestone fireplace that anchored the wall to our right. Comfortable looking chairs cozied up to a coffee table. 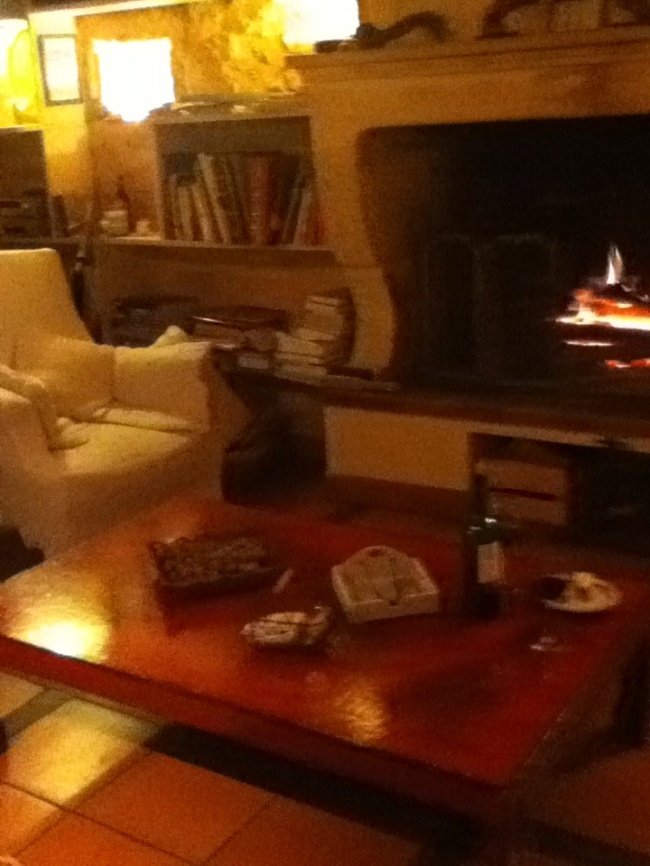 Against the back wall stood an ancient cabinet that appeared to house stereo equipment. Next to it an open doorway led into what I suspected by the fragrances wafting into the lounge was the kitchen. A long plank table that appeared to be much older than the house took up most of the left side of the room.

Registration was simple and then Martine ushered us through her office into a hallway and up a very narrow, steep staircase. Our room must be in the attic!

What a surprise when she pushed open the door! The space was light and airy and decorated in cool blues, beiges and whites. There was a definite sense of the Mediterranean in the little collections of shells and sand dollars scattered on the tables and the seascape paintings on the walls.

The reservation included dinner for the two nights of our stay and Martine told us it was served at 6 pm. She added, “Please join us before for a little wine.” After unpacking the few items needed for our short visit to Romagne, we plopped on the soft bed for a nap.

Refreshed, it was time to head downstairs. As it was a cool evening, a fire had been lit in the large fireplace. The coffee table held baskets of crackers and nuts. From the corner by the dining table, a tall multi-branch standing lamp cast an amber light over the room. We felt at home in one of the warmest and most welcoming places we had ever stayed. 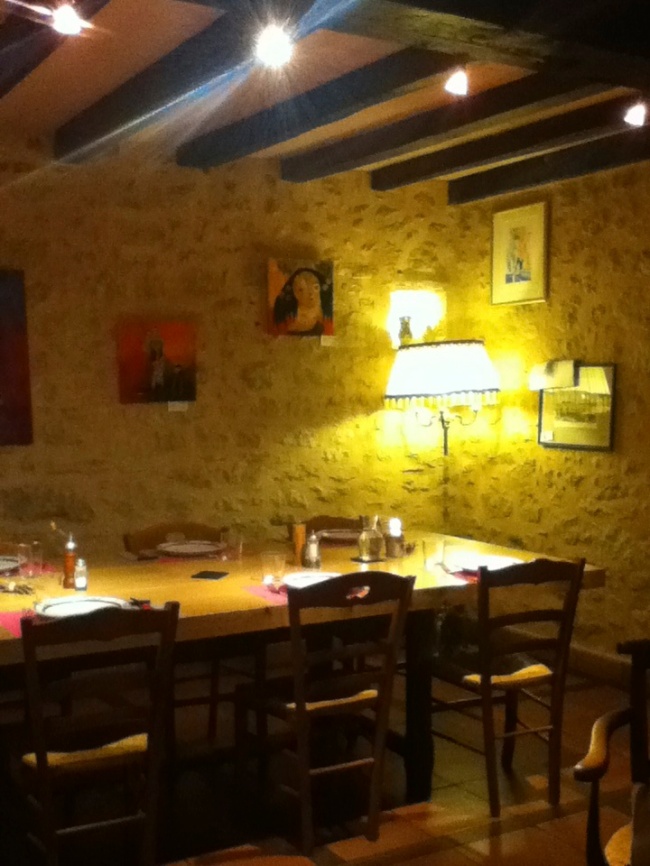 We met Bruno, Martine’s husband, partner in running the bed and breakfast and vintner of the Château de Crécy. He spoke less English than Martine, but the lack of a mutual language did not prevent him from being hospitable and friendly. After he poured us each a glass of white wine, he pointed to the label on the bottle and indicated that this was his own product, made from grapes grown on the estate.

Bill spied an assortment of CDs piled on the cabinet that held the stereo system. He gestured to Bruno, “Jazz?” Bruno grinned and shook his head yes. Soon the two were happily sorting through the disc collection to come up with some pre-dinner music. Their love of music connected the two despite the fact that neither of them understood a word the other was saying. 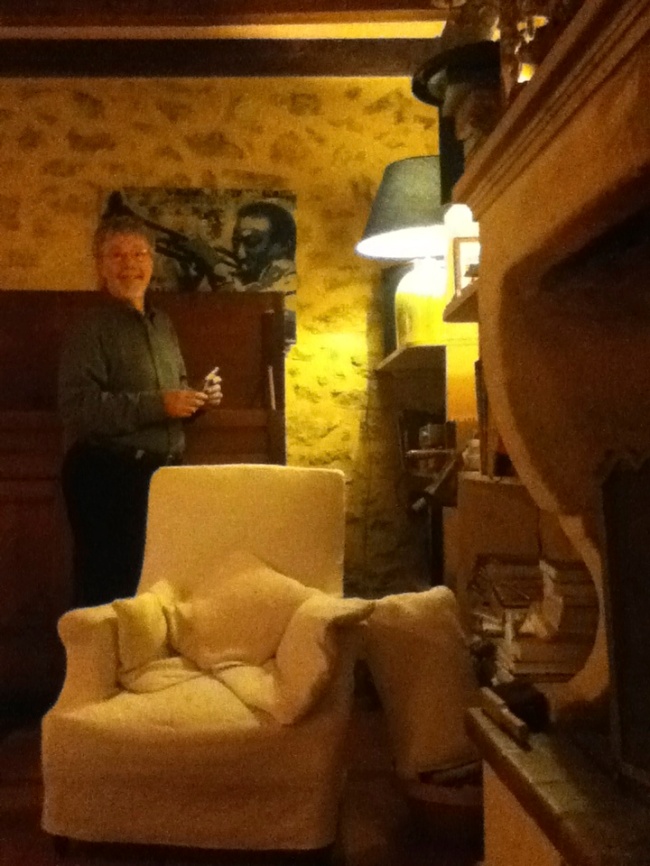 As we relaxed before the warmth of the fire, thumbing through a couple of books of French photography, other guests arrived. An SUV pulling a trailer with a very large sailboat pulled into the drive. The woman driver and two middle-aged men hopped out and entered the building. They were all apparently former guests as Martine and Bruno greeted them with kisses on both cheeks.

The three nodded to us and accepted wine from Bruno. I tried to introduce Bill and myself, but my accent may have flummoxed the newcomers. Finally, the woman peered at me with a raised eyebrow and asked, “British?”

“No, Madame, we are American.” To my embarrassment only English words could escape my lips. Madame lifted her shoulders in a little shrug and turned away. Hmm…this could be an awkward dinner.

We climbed back upstairs to change from our traveling clothes to something dressier for dinner. I dug out my French-English phrase book and stuck it in one pocket of my jacket. In the other pocket went my tiny Larousse French dictionary.

At the table, Martine directed each of us to a specific seat. We sat nearest the kitchen and across from a young couple. The three older people we had met earlier were seated a bit down the table. We greeted the young man and woman and were relieved to find they both spoke excellent English. She was from Paris and he from Ireland, but they lived and worked in Brussels. As they introduced themselves in French to the other three who responded with enthusiasm, I sighed. Oh, to be able to converse in this beautiful language!

Dinner began with the freshest foie gras one could imagine. Both flavor and texture were impeccable…buttery, savory, meaty. Bruno told us with hand gestures that the liver came from one of his home-raised geese.

Our hosts served us a main course of succulent pork roast with roasted vegetables. Throughout the meal we drank the wine Bruno made from grapes grown on the chateau property. Each wine, white, rose or red, complemented the food perfectly.

As appetites became sated, conversation picked up. I put down my fork and listened to the banter. Here and there words were discernable, then phrases. It seemed the topic was the entrance of countries from Eastern Europe into the EU. The young woman across from me noticed my attempt to follow the conversation and pointed that out to the others. Soon everyone was speaking a bit slower and watching to see if I understood what they were saying. At moments of comprehension, I nodded and they smiled and continued to direct the conversation towards me.

After a while, I grasped much of what was being said with the exception of the words spoken by the Irishman. Between his rapid French and his strong Irish brogue, he left me in the lurch whenever he opened his mouth. Fortunately his female companion was gracious about translating.

The lively conversation continued through dessert, a tart, juicy apple cake accompanied by more wine. By now, I was braving a few comments of my own. As we have noted throughout our travels in France, the citizens of that country are very pleased when one attempts to speak their language. They will not hesitate to correct grammar errors, but in the end they are generous with compliments. As we got up from the table the older woman said to me with a warm smile, “Madame, vous parlez français très bien!” How kind of her to say I spoke French very well, when my abilities were sadly deficient!