In 2012, we were eager to explore the region of France east and south of the city of Bordeaux. Checking our favorite on-line travel sites, we discovered a bed and breakfast on the outskirts of the village of Romagne. It was situated in a vineyard in a rural area far from major towns. In their confirmation email, the owner stressed, “You will require GPS navigation to find us!”

Taking the admonition to heart, just before we left for Europe we purchased an inexpensive Garmin GPS unit. Neither of us had used GPS before, relying instead on auto club maps in the states and Michelin maps in Europe. We decided to test out the device on the drive from Bordeaux to St. Emilion, our first stop before Romagne. We had a map of the area, but this seemed like a good place to get some practice before heading south later in the week.

Before leaving the parking lot of the rental car agency in Bordeaux, I plugged the Garmin into the power outlet and turned it on. It took a while for it to download maps of France, but no matter. The rental car attendant was educating Bill about the operation of our car. This trip we rented a Citroen Picasso that must have been designed by someone in the spacecraft industry as the controls looked nothing like any car we had ever driven. As Bill speaks just a little French and the attendant spoke no English, it was a lengthy training session.

Just as Bill decided he was ready to say au revoir to his trainer, the GPS revealed a screen where I could type in the address for the Maison de la Commanderie, the boutique hotel where we would be staying in St. Emilion. A map of our immediate area popped up on the screen. A female voice with an English accent mispronounced the street we were to turn onto, but no matter. We could see the first street sign from the rental car lot.

We trundled across the bridge over the Garonne River and merged onto the highway towards St. Emilion. Traffic was swift, but light. At the beginning of November, the vineyards were green-gold. Hues of scarlet and orange crowned the trees. We drove with windows down catching whiffs of acrid smoke from burning leaves. It was a perfect day for a road trip.

For many miles, our GPS unit was silent as we sped along towards the wine country. Two hours or so into our trip, the Garmin began issuing frequent commands. “Take the first exit on this roundabout! Rue St. Germaine!” “Take the third exit on that roundabout! Boulevard St. Pierre!”

Sometimes it took the GPS device so long to spit out the road name that we had to whiz around the roundabout more than once. After years of driving in France we were used to that. Roundabouts are a bit like a car-driven merry-go-round. Round and round and round we went! The GPS wasn’t so sanguine. At every missed turn that British voice snarled, “Recalculating!”

The road narrowed as we wound through countryside of sunlit hills and shade-dappled valleys. Neat rows of grapevines disappeared into the horizon. We slowed through tiny villages where stone houses clustered around barrel filled warehouses. Farm vehicles lumbered onto the highway forcing us to drop speed.

Finally, the GPS instructed us to turn onto a road that was bounded by high limestone walls on either side. In the distance we could see a church tower, but otherwise our view was limited to asphalt and stone. After a half-mile or so we emerged from the walls and found ourselves at yet another roundabout. “Take the second exit!” directed the Garmin. We could see that it led straight into the parking area of a commercial building.

“That can’t be right!” we both muttered and kept driving around the roundabout. On our next circuit, Bill took the first exit. This road led us away from town and back to the countryside and to a dirt track that looked like someone’s driveway. We ignored the Garmin’s cries of “Recalculating! Recalculating!” and found our way back to the start of the limestone walled road.

There was no spot to pull over to peruse our map, so at the roundabout Bill took the first exit again to give me time to figure out the route. I hurriedly studied the Michelin map. “Take the third exit this time! It looks like that road leads to the far side of town. We can park somewhere there and walk to our hotel.”

Our new road did lead us to the other side of St. Emilion. We clattered to a stop in a rock-strewn parking lot on the outskirts of the town. Nearby, I glimpsed what looked like a gate, very narrow and overhung with creepers at the nearest side of the lot. An ironwork door sagged from one side. A rusty-brown arrow-shaped sign with white lettering stated: “Centre-Ville.” Bill combed his beard with his fingers and grimaced, “There’s no way we’re going to make it through that gate!”

I had to agree. We were driving a full-size Citroen and even though it was slim for an American car it was a behemoth by French standards. At the far end of the parking lot was a wide alley that also appeared to lead in the general direction of the Centre Ville or center of town. We saw no other entrance into the town proper. Bill shifted back into drive and crept towards the alley.

A middle-aged couple jumped in front of the Citroen, waving their arms. “Non, non monsieur!” We gaped at them. The gentleman rushed to the driver-side window. With hand gestures, he indicated that what we took to be an alley was actually a broad, but steep stairway!

I held up the map showing the circled location of our hotel. The man thrust a finger in the direction of the gate, “La, c’est la!” We were dubious, but the man nodded vigorously and his wife joined in.

We murmured, “Merci beaucoup, madame, monsieur!” Cheeks ablaze, we slid down a bit in our seats. I crammed the GPS device into its carrying case and shoved it into the glove box. Bill backed up and crawled through the gate. It was a tight fit, but our car squeezed through without scraping. We noticed that the gate while very narrow was quite tall.

Parking in the first lot we came to, we sat for a moment, catching our breaths. Then we both began laughing so hard the car shook. On foot, using our map and seat of the pants rather than GPS navigation we found the four-room hotel where we would spend the next few days.

In chatting with the strapping blond owner, we discovered that one wall of the ancient building dated to the 14th century. In that era our hotel had been the home of the knight of the town. Now the tall, narrow gate made sense. A perfect entry for a knight on a charger! 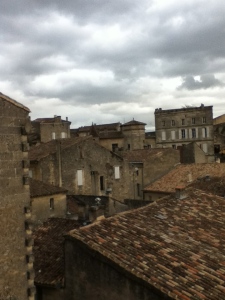 Ancient St. Emilion is a town made for walking, not driving. We left the car parked for several days and explored the winding, cobblestoned streets on foot. Our GPS device remained in the car…resting up for the trip to Romagne.